I decided to write this post because I find it interesting that most us choose to eat processed meat even though we know it is unhealthy. Somehow we have been programmed to like ham and sausages. Maybe it is the high amounts of salt that makes the ham so irresistible or the spices that make chorizo so delicious. I do not know. What I do know is that eating large amounts of processed meat is bad for our health and the daily safe amounts are much lower than we think.

What is processed meat?

Processed meat is any meat that has gone through a process to extend its shelf life or to change its taste. These processes include: salting, curing, smoking and using chemical preservatives such as sodium nitrite. Meat in ready meals, chorizo, bacon, ham, salami and hot dogs are all referred to as processed meats, but even healthier options such as smoked salmon fall into this category.

Why is it bad for us?

Most of us know that eating too much processed meat is bad for us, but what is surprising is that the daily limit is much lower than we think. The most recent study in the BCM Medicine recommends eating no more than 20g of processed meat per day. This is equivalent to one thin slice of ham or half a sausage. However the World Cancer Research Fund recommends completely eliminating processed meat from the diet.

So how can you cut down on your processed meat consumption?

1) Reduce the portions – Restaurants often serve processed meat in much higher quantities than we should be eating. So instead of having 3 rashes of bacon included in your breakfast, ask for 1. It is easier not to eat the bacon if it’s not already on your plate. Equally, when you are buying a sandwich ask for 1/2 the amount of ham or turkey they give. Your sandwich will be healthier and you will still get the same taste.

2) Look for healthier processed meats – Always read the label! There is a big difference between eating mass produced, supermarket sausages and sausages produced by a local farmer who you trust and who only uses a handful of ingredients. At minimum, avoid buying sausages with sodium nitrite or MSG, but ideally you also want to avoid ingredients such as high fructose corn syrup, preservatives, artificial flavor or color. Go for 100% chicken or turkey to make sure skin and other parts have not been included.

3) Switch to other protein sources – Instead of using processed meat like ham, sausages or ready made burgers as the main source of protein in your meal or your sandwich, go for fresh red meat, poultry, fish, eggs, or legumes. If you are eating processed meat as an addition in your meal, for example chicken wrapped in bacon or prosciutto pizza, then try to leave the processed meat out.  Remember that you are more likely to stick to eating less processed meat if you make the reductions gradually, so don’t cut out everything at once. Give yourself time to find the alternatives that you really like.
.
4) Do not assume that meat alternatives are healthier – It is so easy to make the assumption that vegetarian sausages are healthier than normal sausages, just because they are made of soy. This is not always the case. Vegetarian sausages can have a long list of ingredients that are bad for you including high amounts of salt. As with meat products, always read the ingredients. 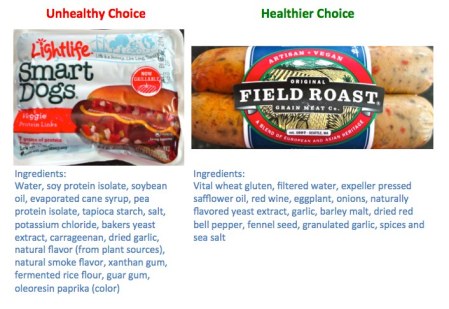 The last thing to remember is to eat a diet high in antioxidants, especially vitamin C. Studies have shown that eating vitamin C at the same time as processed meat, reduces the nitrosamine formation in your stomach. So make sure that you load your plate with fruit and veg when eating processed meat. Some experts even recommend having a vitamin C supplement ready in your handbag, just in case you find yourself in a restaurant eating processed meat.